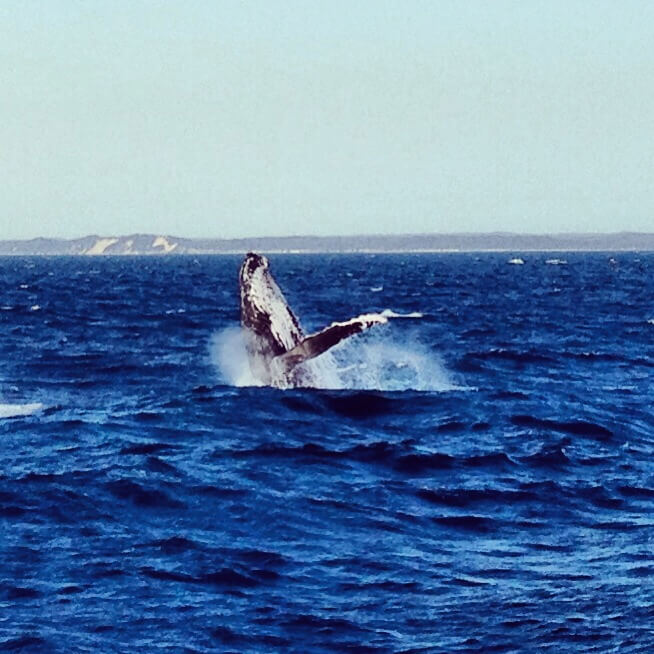 One of the best and most memorable experiences I had in Australia was a whale watching trip. On day nine at 625 miles into our road trip along the east coast of Australia from Sydney to Cairns we arrived at Hervey Bay. Hervey Bay is a very popular spot in Queensland for whale watching trips. Matt and I had been really indecisive about our plans and whether to go whale spotting, so a last-minute decision saw us leave Rainbow Beach and drive two hours along the coast, I am so glad we made the decision to go. Arriving just after 1pm we were very lucky to get on a trip that had spaces left at 1.30pm. We hastily booked onto it and as we had not had lunch we grabbed snacks from the van and made a run for the boat!

We went with Tasman Venture who have two trips a day running from July to October. Cruising out of Hervey Bay our route took us past the famous Fraser Island, at 75 miles long it is the biggest sand island in the world and pretty impressive. With around four hours at sea we were lucky to witness a lot of whale action! Humpbacks and right whales make their annual migration to Antarctica from July to November and stop in Hervey Bay to rest and rear their young. Not long into the journey we spotted a mother with her calf, the guides told us that this particular whale returned every year. It was incredible to see them moving so gracefully through the water, fin slapping, breaching and tail slapping too. I learnt from a very handy whale watching leaflet that the way to tell the difference between a humpback and southern right whale at a distance is from the shape of the air they blow out. Humpbacks push air straight up and right whales create a ‘v’ shape.

The first time I saw a whale from the shoreline made me feel quite emotional and to see them so close was breathtaking. It was a pretty stormy day with the boat rolling around a lot and quite a few people were ill. Before the boat left we were all warned of the impending bad weather and given the option to do the trip another day. I was alarmed at one point to see a couple shuffling along the floor on their knees, I couldn’t understand what they were up to, until one of the crew came and helped scoop them up…they had got sea sickness in a very bad way! I also found Matt up on the starboard side of the boat a one point clinging onto to the railings for dear life, unable to move because of the wind and the unsteadiness of the boat! It was getting very rough, so we retreated below deck to warm up with a cup of tea and a slice of cake and got the best sighting of the afternoon of the mother and calf leaping out of the water together. It was a fantastic day despite the weather, if you are planning a trip to Australia make sure you go whale watching, it really is a unique experience. 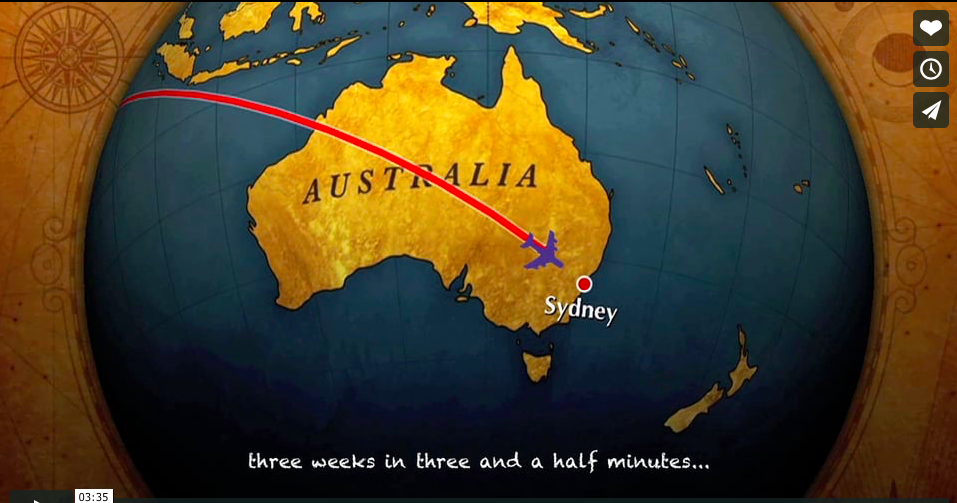 Matt and I have put together a short video documenting our adventures in Australia. We spent three weeks travelling from Sydney to Cairns and covered 1633 miles. To view in HD click here. Hope you like it…

Here’s some of my blog posts all about our Australian adventures:

Planning a Road Trip on the East Coast of Australia

Cool Campsites on the East Coast of Australia

In Search of the Cassowary

Five Things to do in Sydney 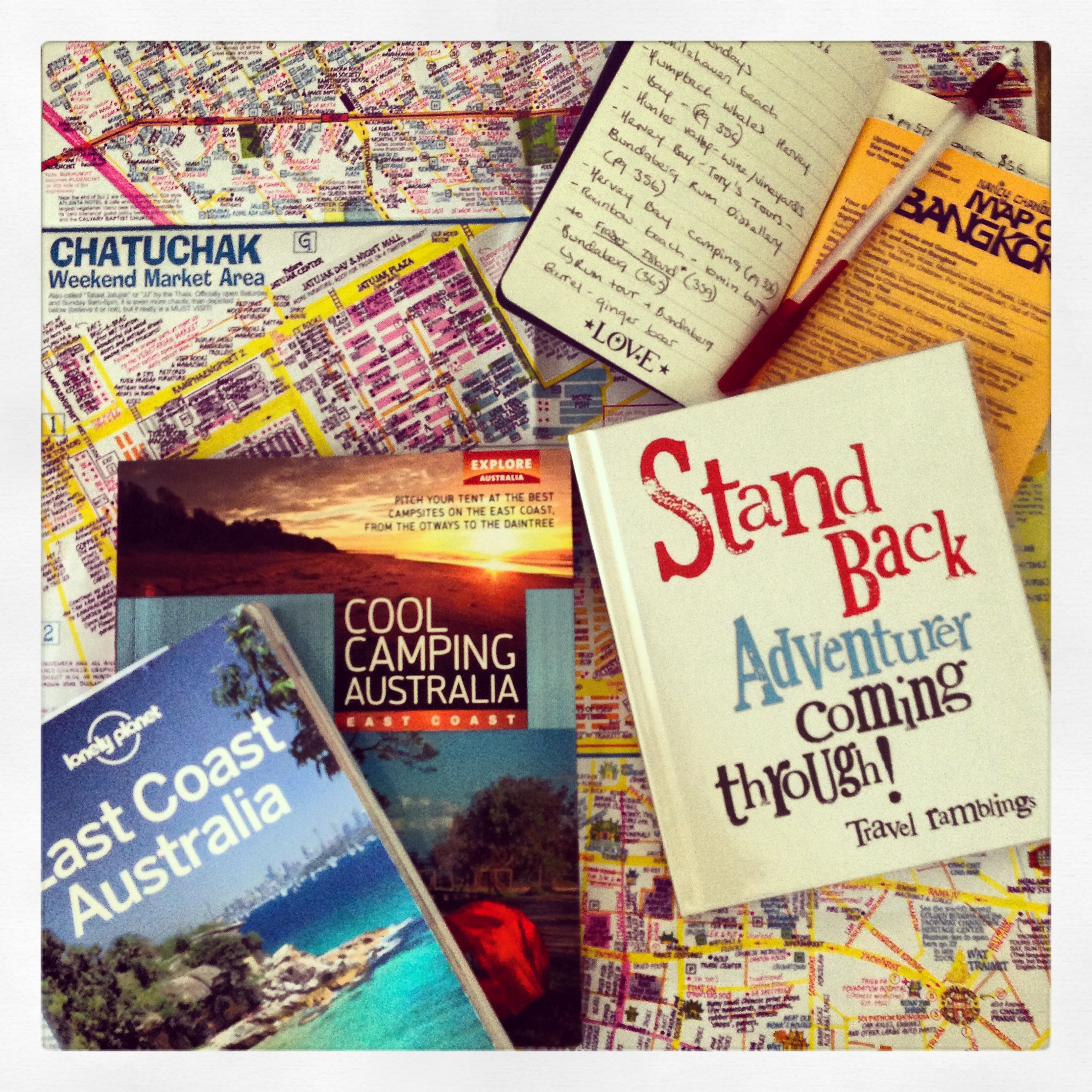 I am heading to Australia in under a month and I am so very excited about it!  This will be my first visit down under and I can’t wait to actually be there!  My husband Matt and I are flying out from London Heathrow via Bangkok, spending two nights there and then flying on to Sydney.  We have a hired a campervan through Jucy rentals and are going to work our way up the east coast, starting from Sydney and ending in Cairns.  With the flights and van booked I am now in the process of drawing up a rough itinerary of where we want to stop off and what we want to see and do.  I almost love the planning stage as much as I love travelling and going away itself!  I love purchasing travel books and researching the destinations I am heading to.  Itineraries, list making, research, you name it, I love the build up to a trip away.  Not to mention buying books, magazines, toiletries, beachwear, flip-flops etc.  Although having said that I need to be pretty good in what I pack as we will be living out of a van.  My challenge will be to pack as little as possible…

I would love to hear your recommendations and tips on things to see and do on the east coast, as well as any advice on camping spots.  Please let me know 🙂

We use cookies on our website to give you the most relevant experience by remembering your preferences and repeat visits. By clicking “Accept”, you consent to the use of ALL the cookies.
Cookie settingsACCEPT
Manage consent

This website uses cookies to improve your experience while you navigate through the website. Out of these, the cookies that are categorized as necessary are stored on your browser as they are essential for the working of basic functionalities of the website. We also use third-party cookies that help us analyze and understand how you use this website. These cookies will be stored in your browser only with your consent. You also have the option to opt-out of these cookies. But opting out of some of these cookies may affect your browsing experience.
Necessary Always Enabled
Necessary cookies are absolutely essential for the website to function properly. This category only includes cookies that ensures basic functionalities and security features of the website. These cookies do not store any personal information.
Non-necessary
Any cookies that may not be particularly necessary for the website to function and is used specifically to collect user personal data via analytics, ads, other embedded contents are termed as non-necessary cookies. It is mandatory to procure user consent prior to running these cookies on your website.
SAVE & ACCEPT
Loading Comments...